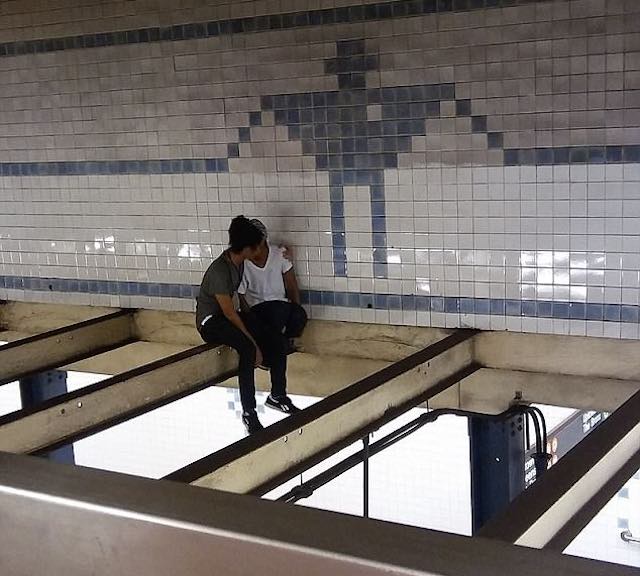 A situation that could have ended in tragedy took an inspiring turn last weekend when a Good Samaritan risked his own life to comfort a suicidal woman and talk her down from the edge.  The woman was first spotted on Saturday afternoon crawling across a section of beams in the Broadway and Lafayette subway station. The beams, which were roughly 20 feet above the subway floor, made for a dangerous drop.  38-year-old pedestrian Michal Klein saw the woman and – though she was not sure whether the climber was suicidal or not – became concerned for her safety.  Klein then saw a young man start crawling across the beams to where the woman was sitting. When the youth finally reached the woman, he sat next to her, put his arm around her shoulder, and started talking to her quietly.  Touched by the heartwarming display of kindness, Klein snapped a photo of the two strangers perched on the beams.  The young man stayed with the woman until emergency personnel arrived and cleared the area. Eventually, the man and woman came down from the beams and the woman was taken to the hospital by ambulance.  “I hope she gets [the] help that she needs,” wrote Klein. “And bravo to the young man for risking his own safety to help.”  “He actually cared enough, whoever he was, to help her. A lot of people seemed to be like ‘Oh, it’s New York’, and kept walking,” Klein told CBS New York. “I don’t know what I would’ve done. I don’t think I would’ve climbed over to do that.”