10 Things Not To Do When Proposing Marriage 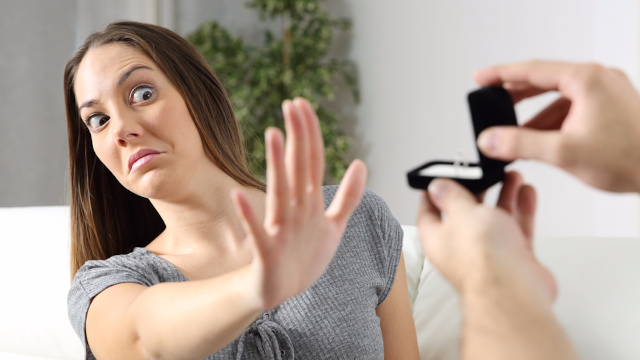 What are the biggest mistakes people make when proposing marriage?  If you’re planning on popping the question soon (or if you know someone who will be), you’ll want to avoid certain proposal faux pas!

Over 50% of proposals today are initiated by the woman. That means that women are getting more aggressive about moving the relationship along. That is not a natural tendency for men. For them, “moving the relationship along” means getting the phone bill in both their names. Fred Cuellar is the author of “How To Buy A Diamond” and “The World’s Greatest Proposals” He and Korbel Champagne teamed up to research proposal stories and he compiled a list of 10 mistakes to avoid:

1. Proposing on a holiday or birthday. Consider picking a day meaningful to your relationship, such as the anniversary of your first date. Your girlfriend wants her day to shine – don’t propose on a holiday that can’t be yours as a couple.

2. Allowing other women to try on the ring. It’s smart to get a second opinion, but don’t use your fiancee’s friends as guinea pigs. She doesn’t want to find out they all saw it before her. She wants to show it off for the first time.

3. Leaking the news. When you’re ready to pop the question, don’t spill the beans to too many “confidants.” Sharing the news with friends and family is more exciting if you do it together.

4. Forgetting her family. Pull your manners out of the closet and call the appropriate member of her family for “the talk.” According to a recent survey conducted by Korbel, 42 percent of Americans feel the act of asking a woman’s family for her hand – whether it be her father, mother or even a sibling – is still a time-honored tradition.

5. Playing hide and seek with the ring. Imagine this: you’re about to propose to your girlfriend when she swallows the ring because you “cleverly” hid it in an ice cream cone or cocktail. Sending your fiancee to the emergency room might not be the best way to start your future.

6. Staging a practical joke. Minutes before the proposal, throwing your girlfriend off by convincing her that you’re in jail or that you won’t be ready for marriage for years could have unintended consequences.

7. Missing the VIP treatment. Do your research and you’ll find that many venues are happy to create a special setting for your proposal. For example, many theaters will schedule private screenings, restaurants can provide champagne toasts and amusement parks can offer private rides.

8. Exhibiting suspicious behavior. As proposal time approaches, make sure your behavior remains consistent with how you act on a daily basis. Repeatedly touching your pocket to make sure the ring is secure and coming up with off-the-wall excuses for your whereabouts can both be giveaways to the bride-to-be.

9. Acting like you settled. A surefire way to ruin any proposal is to start with any of the following statements: “You win.” “We’re not getting any younger…” “In spite of what my mother says…” “I’ve sowed my wild oats.”

10. Losing sight of what the proposal is all about: Your proposal will be perfect if it is honest, heartfelt and passionate.