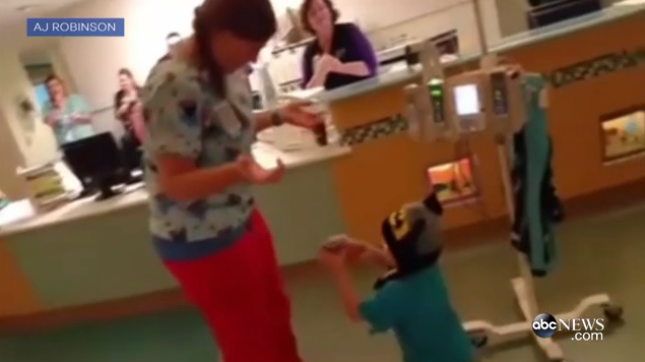 A California nurse made one little boy’s day after she accepted his hospital “proposal.” According to Yahoo News, AJ Robinson said his son, 5-year-old Gideon, was diagnosed with leukemia on Nov. 17, 2015. Gideon was then sent to Rady Children’s Hospital in San Diego for chemotherapy, where he met his favorite nurse, Sarah Richards. Robinson said that Gideon got the idea to ask Nurse Sarah to “marry” him after finding out she didn’t have a husband. On January 27, Gideon made a ring out of a bead and pipe cleaner and presented it to her in front hospital staff. Robinson said “She agreed and she said, ‘Of course, you can be my hospital husband.'”

Watch the proposal for yourself in this charming video!