On today’s Creation Moments Minute, we begin our look at one of the strangest creatures on Earth – the South American false-eyed frog. 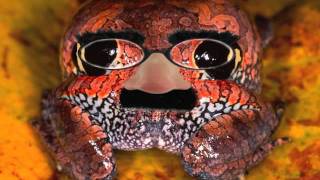 When the South American false-eyed frog is approached by a predator, it behaves in a way that evolution is powerless to explain. It turns its back on the predator. So how is this a good strategy? In the time it takes to spin around, the frog’s back is changing color to look like a pair of large, menacing eyes, complete with black pupils surrounded by blue irises. And it accomplishes this in only one second.

To complete its disguise, the frog raises its rear-end up high and tucks its hind legs underneath his fake eyes so the legs now look like a large mouth. Above the fake mouth appears what looks like a nose.

But there’s even more to this amazing frog’s disguise … as we’ll see next time.